CNY holidays just passed and I got a little bit of money (I need to sneak into Chinese homes and receive more money) Anyway I did no visiting and had four whole days to catch up on work, so of course I did just that! Just kidding, I did the opposite of that and did zero work! (That’s not the complete truth I started catching up on my Theatre journal and stopped… half… way.) My mother was just in my room giving me the daily lecture how I have to focus on my work, IB is next year blah blah and she said stuff about how I can focus on my work first and then watch tv shows/ tumblr/ waste my life later. That sounds deceptively easy. I WANT to do that but I just cannot bring myself to? It’s a serious problem I don’t know why I cannot just will myself to do work this has been going on forever and over time I haven’t gotten better at managing time I’ve gotten better at doing last minute work this is HORRIBLE habit but I cannot stop it is an actual problem and it’s not just me I have many friends who have the same exact problem? I read some article about how procrastinators procrastinate because they’re just really scared to do work because it might not be good enough. That sounds nice but how do I stop this? Really please help. Anyway this is procrastination and here are some of my opinions on two movies I watched during the CNY holidays.

This movie is the 1989 one (they did a 2012 remake with black people instead, Queen Latifah was in it but I didn’t watch that one). This one had a lot of super cool people in it like baby Julia Roberts, Sally Fields, and Dolly Parton! I did not know this but Dolly Parton was really pretty before she got that plastic surgery. Anyway this movie is about a group of ladies going through LIFE in the SOUTH. The title kind of explains it they’re supposed to be frail Southern ladies so magnolias but they go through lots of stuff and they’re strong like steel. Sally Fields is Julia Roberts mother and Dolly Parton is a hairdresser and she has this other assistant and they have to other old lady friends and they just go through life. The movie isn’t a story about an event it just goes to different events in their lives.  The tone of the whole movie was really nice and it has super good complementary music. I guess this could be described as a chick flick? But not the girl gets guy kind more like the kind you would watch with your mother and cry together about. I did cry in the movie it was really really sad at one part. But it balances out with the laughter and friendship part. It was a really good movie. Rotten Tomatoes gave it 67% but I give it 74% because it was nice.

From Up On Poppy Hill 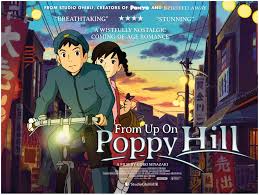 This is a Studio Ghibli movie! I LOVE Studio Ghibli and I love this movie but it is not the epic fantasies they usually put out like Princess Mononoke (my favourite!!) or Spirited Away (Grave of The Fireflies is not an epic fantasy but quite drama so I’m including it) This one’s set in Japan after the war before the 1964 Tokyo Olympics. It’s bit more low key and directed by the younger Miyazaki. It’s about a girl named Umi whose father was a captain of a ship but his ship sank during the Korean war but his body was never found and her mother is studying in America and she lives in a boarding house with her siblings and raises flags every day facing the docks, hoping that her father will see them and answer her. So (according to the movie I don’t know these things) at that time Japan was trying to push back the past and move to modernity with the Olympics and in Umis school there are some boys who have this weird old house which houses all the academic CCAs but only for boys? and it’s under threat of being demolished. And there is a super cute boy there really he is very very cute and they kind of have a crush on each other and she helps out there. Then there is a PLOT TWIST but I cannot tell you it would ruin it. When I realised the plot twist I screamed ‘WHAT’ a lot it was really a shock and had the potential to be handled terribly but it was handled okay and I really liked the movie it was sweet and nostalgic and I really like the tone of the whole thing. Rotten Tomatoes gives this 83% and I give it the same it was pretty good not fantastic but still very enjoyable.